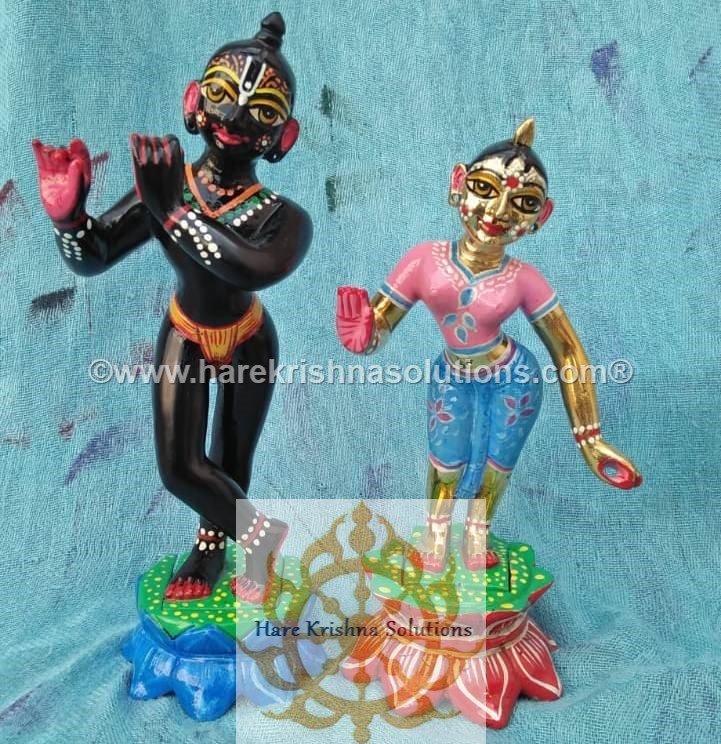 Ravi ( name changed) contacted me through my Google Business App a few months back ….it was lockdown everywhere and the calls from youngsters and middle aged people were now very frequent. They were all in anxiety and stress , this was the first time all the humen in the planet were facing such a situation .We had never experienced a day where we were asked to work from home and still generate revenue, children were asked to stay at home and study and still be attentive as in school , housewives could not spend time and money on shopping. The situation took a toll on many – meditating helped but first time they were facing questions. Questions about their lives, about work , about relationships, where were they heading to . They realised how subtle everything around them was . They needed answers real deep answers to their questions , for their confusions, and they knew Spirituality was the only way.

This brought them to me . Many came spoke to me and left. Some stayed and got grounded.They understood the meaning of life .Ravi was one of them . In these few months ge had really changed from his looks to his habits upto his understanding of things around him , his relationships and his future. But yesterday he was again in anxiety and approached me again he had new sets of questions.
Everything is almost normal now and he has again started bothering for his future . He had started to establish a start up right from a young age of 19 years, but something always went wrong .His business partner cheated or his family won’t approve . He was totally disheartened and has given up . At 22 years he had already given up on life. He remembers when he was about to hang himself and in his final attempt to find positivity he opened youtube and came a beautiful Krishna kirtan …he slept with the headphones on that night and next day he was fresh and beaming with new life . He is much better now . But he wanted to know why his business ideas and his attempts never work out.

Särärtha-Varñiëé: Arjuna may ask the following question: “From
the verse ärto jijïäsur arthärthé jïäné (Gétä 7.16) till now, You have
explained various types of bhakti. Which one of them should I
follow?”
To remove Arjuna’s doubt, Çré Bhagavän says, “O Arjuna, at present
you are unable to give up karma, jïäna and so on, and therefore, you
do not have the qualification to perform the topmost bhakti, namely
kevalä- or ananyä-bhakti. And you do not need to perform the inferior
and selfish acts of devotion performed with material intention (sakäma-
bhakti), because your qualification is higher than that. Therefore, you should perform bhakti that is predominated by and mixed with karma
and jïäna – niñkäma-karma-jïäna-miçrä-pradhäné-bhütä-bhakti.”
For this reason, Çré Bhagavän is speaking this verse beginning with
the words yat karoñi, and also the next verse. “Whatever mundane
or Vedic activities you perform as normal routine, whatever food or
water you take daily, and whatever austerities you may perform, you
should maintain the understanding that all of them can be offered to
Me.” This, however, is neither niñkäma-karma-yoga nor bhakti-yoga.
Those who are devoted to niñkäma-karma-yoga offer to Bhagavän only
those actions prescribed in the scriptures, not the normal activities
of day-to-day life. This is common. But devotees offer every function
of the senses along with their soul, mind and life-airs unto their
worshipable Lord. As it is said in a description of bhakti in Çrémad-
Bhägavatam (11.2.36), “Whatever activities a devotee performs with
his body, speech, mind, senses, intelligence and soul, or by dint of his
own nature, are all offered to the transcendental Çré Näräyaëa.”
The following question may be raised: If juhoñi (the performance of
sacrifice) is the same as arcana, a limb of bhakti, which is performed
for the purpose of satisfying Çré Viñëu, and if tapasya (austerity) is to
perform the Ekädaçé fast, then why are these acts not considered to be
ananyä-bhakti, exclusive devotion? In response Bhagavän says, “This
is all right, but in ananyä-bhakti, actions are not offered to Bhagavän
after they have been performed; rather, a person first offers them to
Him and then performs the act.” As Prahläda Mahäräja said:
çravaëaà kértanaà viñëoù smaraëaà päda-sevanam
arcanaà vandanaà däsyaà sakhyam ätma-nivedanam
iti puàsärpitä viñëau bhaktiç cen nava-lakñaëä
kriyeta bhagavaty addhä tan manye ’dhétam uttamam
Çrémad-Bhägavatam (7.5.23–24)
One who completely surrenders everything to çré guru and
Bhagavän, and having done so performs the nine limbs of devotional
service such as hearing (çravaëam) and chanting about Kåñëa
(kértanam), remembering Him (viñëu-smaraëam), serving His lotus
feet (päda-sevanam), worshipping Him (arcanam), praying to Him
(vandanam), becoming His servant (däsyam), becoming His dear
friend (sakhyam) and fully surrendering to Him (ätma-nivedanam)
possesses topmost knowledge.
Here it is evident that bhakti is performed if one first offers these
activities to Him, not that the activities are offered after they are
performed. In his explanation of this verse, Çréla Çrédhara Svämipäda
says that bhakti to Viñëu is performed while offering these activities
to Him, not after. Therefore, the present Gétä verse does not culminate
in kevalä-bhakti.
Särärtha-Varñiëé Prakäçikä-våtti: Here, Bhagavän speaks to
His dear friend Arjuna, whom He is using as an instrument to teach
humanity. His instruction is meant for those who are unable to take
shelter of the most superior ananyä-bhakti as He has described it, and
also for those who do not have a taste for performing a lower class of
bhakti. Çré Bhagavän is advising them to adopt karma and jïäna that is
selflessly performed, in which everything is offered to Him and which
is mixed with and predominated by devotion (niñkäma-karma-jïäna-
miçrä-pradhäné-bhütä-bhakti).
When Kåñëa says, “Whatever actions you perform, be they
mundane or Vedic, offer them to Me,” a person should not wrongly
think that he can perform any activity and eat and drink whatever
he likes as long as he offers it to Bhagavän, and that there will be no
defect. His actions will not necessarily be successful simply because,
out of obligation, he offers all of them to the lotus feet of Bhagavän.
An act may be prescribed in the Vedas for worshipping a particular
demigod or it may be executed with a particular desire in mind, but
it may not be actually offered just by uttering the mantra, çré kåñëäya
samarpaëam astu, like the materialistic smärtas do, who are engaged
in mundane activities. For this reason, all commentators on this verse,
like Çréla Çrédhara Svämé, have explained the deep meaning: one
should act in such a way that all of one’s activities are offered directly
to Çré Bhagavän. In other words, only those actions that are performed
for His pleasure should be offered. In Çrémad-Bhägavatam (1.5.36)
Devarñi Närada also says, “kurväëä yatra karmäëi bhagavac-chikñayä –
the surrendered devotees only perform those acts that are pleasing to him.

This works in every sphere of life from childhood to old age . It is like doing everything for a boss who is so lineant and merciful that you don’t have to worry about the result and he endevours for your success.

To know more write to us on : https://harekrishnasolutions.com/contact/ 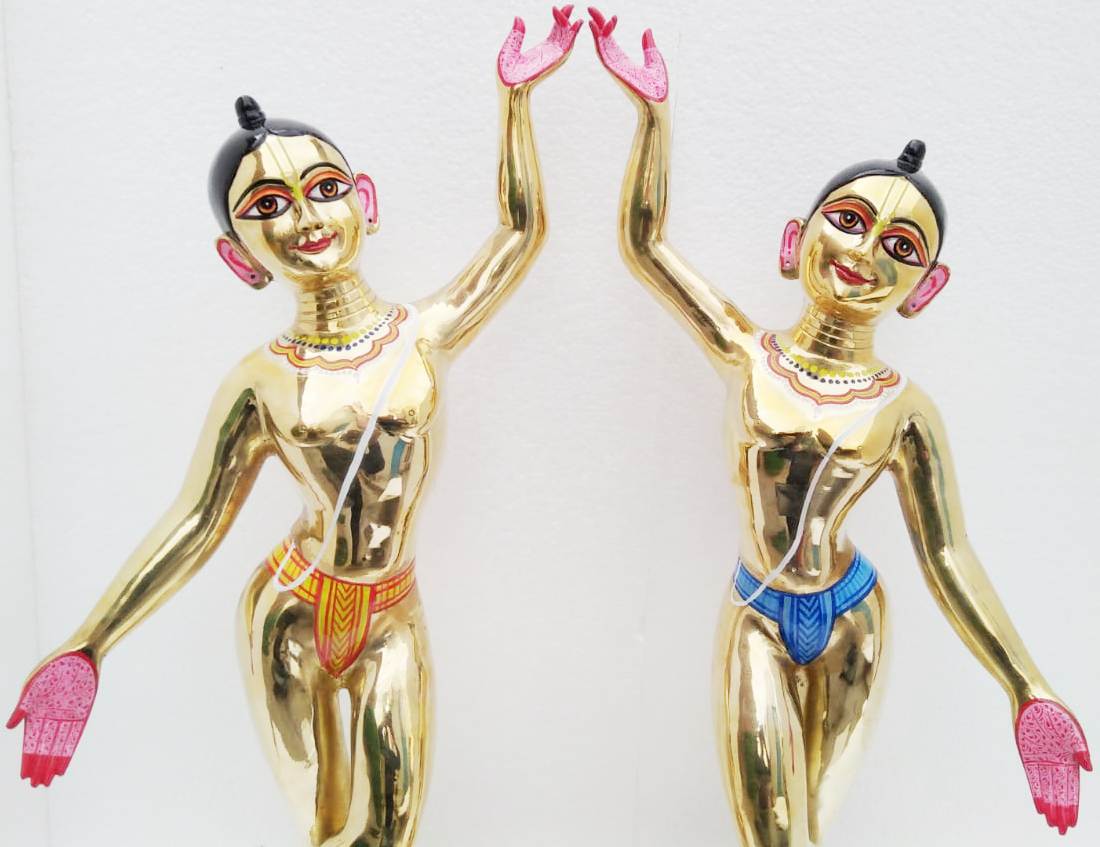 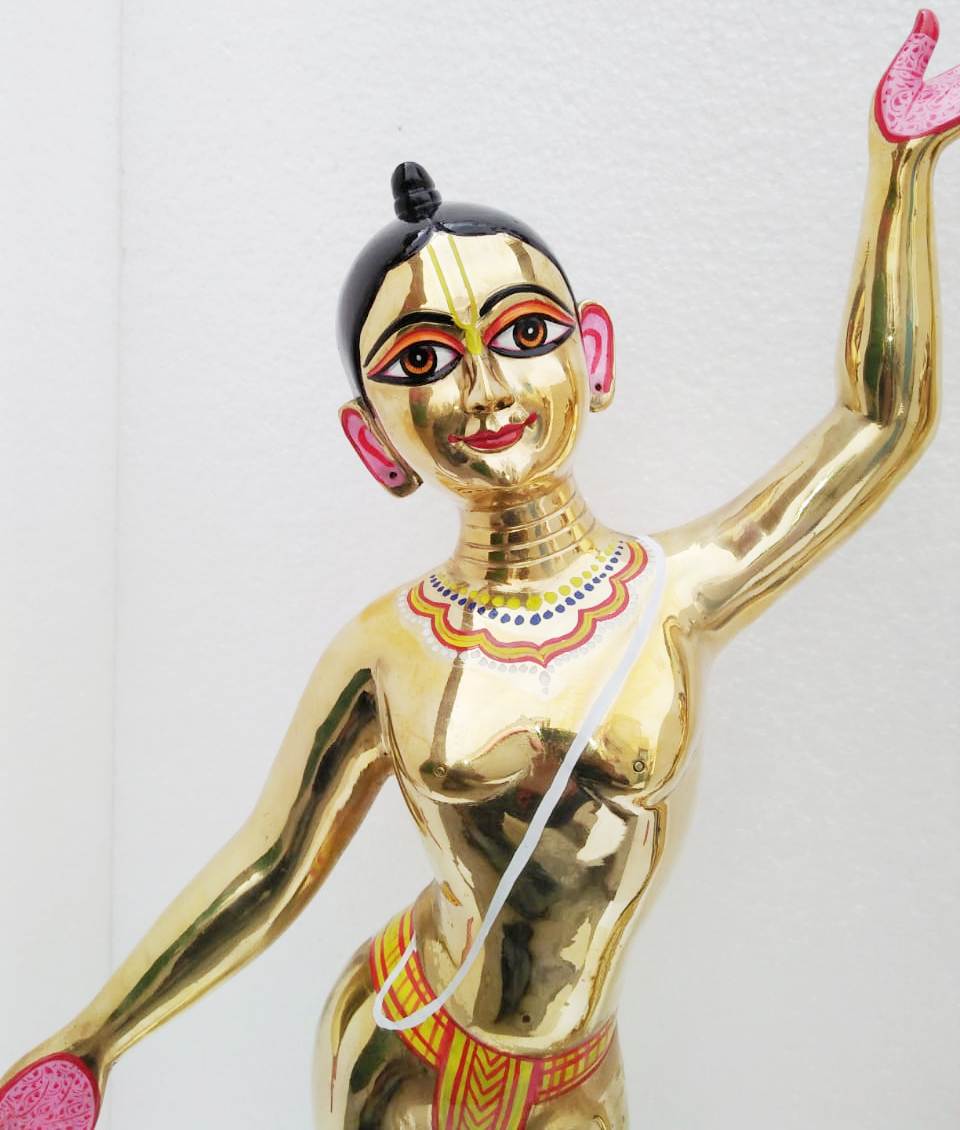 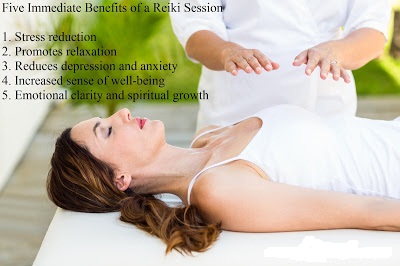 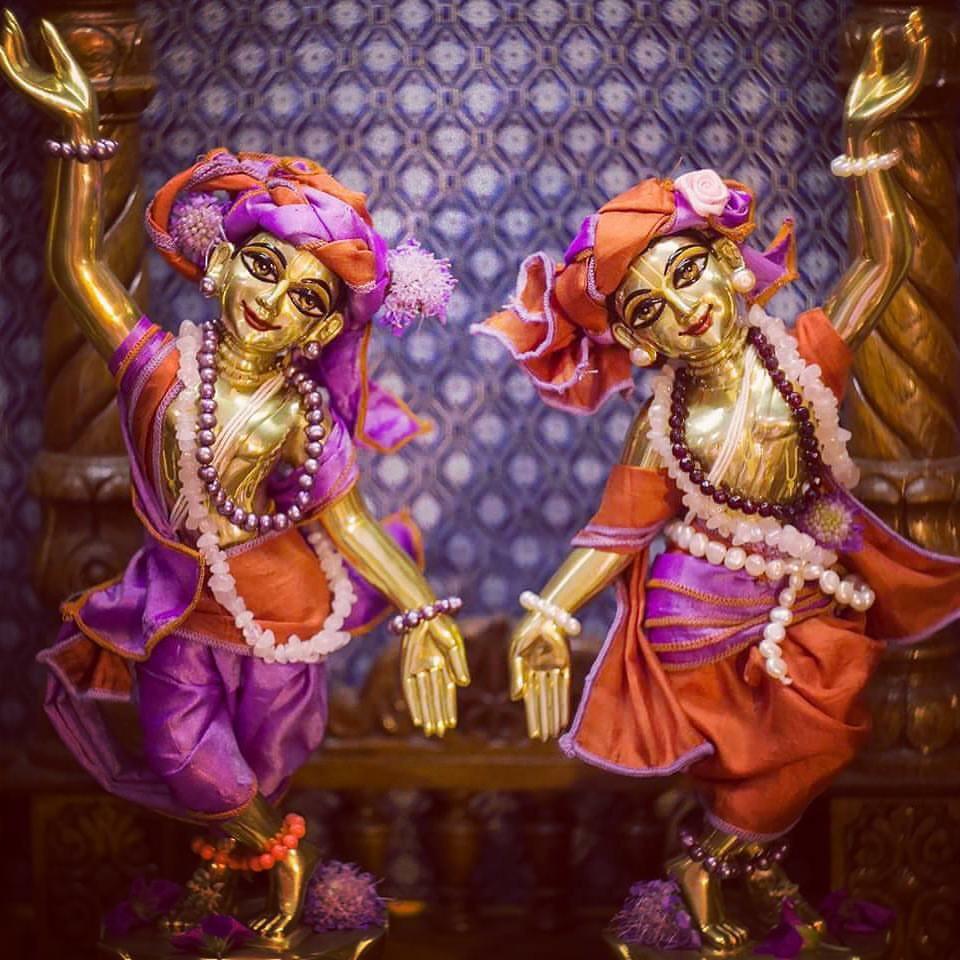 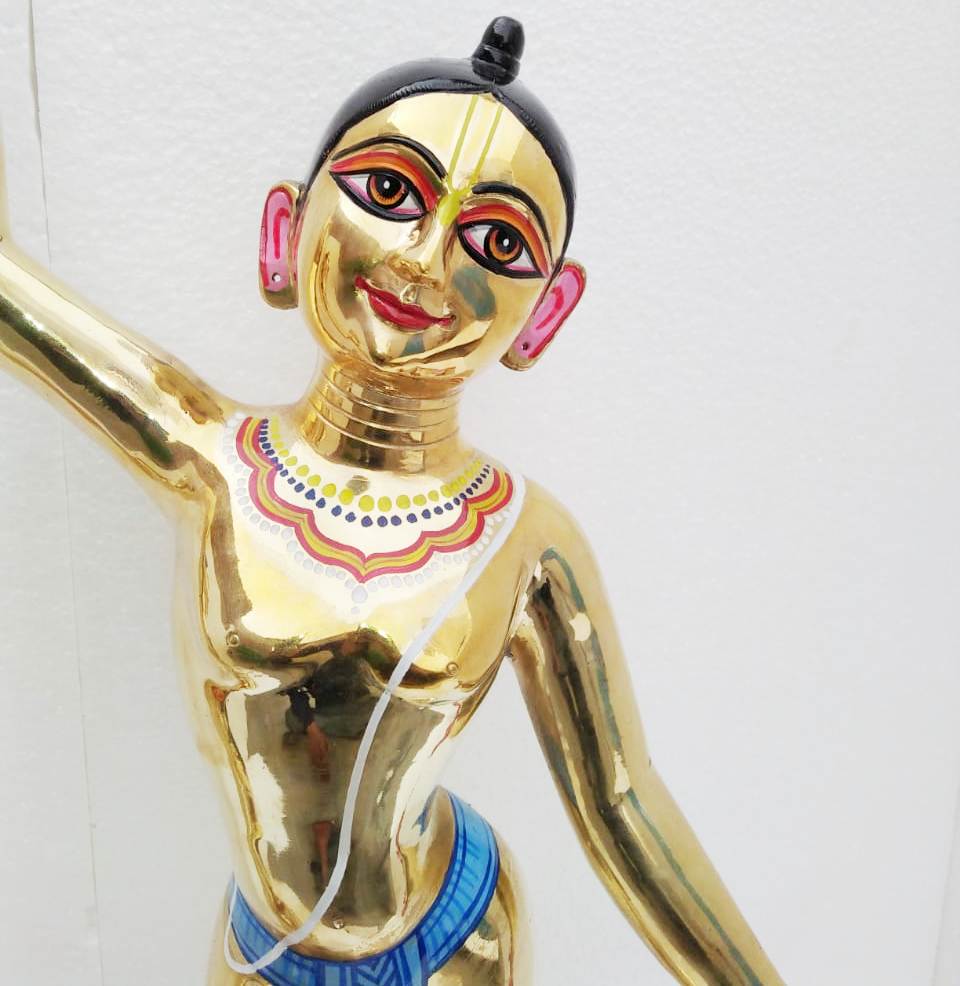 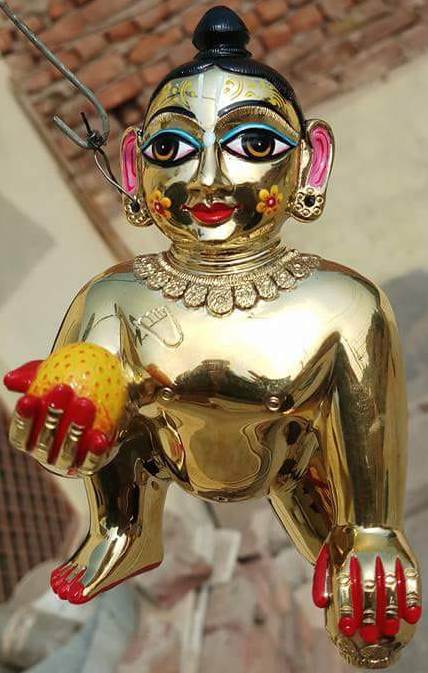